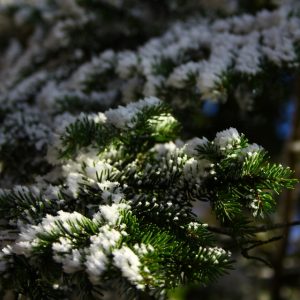 So what, exactly, does one do with a 72-foot (22-meter) Christmas tree once the holidays are over? Recycling the Rockefeller Center tree takes repurposing to a whole new level. The tree is milled into lumber, which is then donated to Habitat for Humanity and used to build a home. Each piece of wood is stamped “Rockefeller Center Tree,” along with the date of its 15 minutes of fame.
https://people.howstuffworks.com/culture-traditions/holidays-christmas/5-facts-rockefeller-center-christmas-tree.htm

England’s Prince Albert is credited with helping bring the Christmas tree from his native Germany to the English-speaking world, making it a well-publicized tradition in the royal household of his wife, Queen Victoria. Godey’s Lady’s Book editor Sarah Josepha Hale—one of the main advocates for a national Thanksgiving holiday—played an important role in promoting Christmas trees in the U.S. when her magazine published an illustration of the British royal family with their tree in 1850. She edited out Victoria’s crown jewels, Albert’s mustache and sash, and any reference to who the family were, transforming the picture from a piece of royal marketing to a paragon of middle-class, American, Christmas celebration. Albert would remain associated with the Christmas tree for years. Following his death on December 14, 1861, English families living in New York City reportedly draped their trees in black in honor of his memory.

The most famous song about a Christmas tree may be “O Tannenbaum,” but in German, the word tannenbaum just refers to a general fir tree. The actual German word for “Christmas tree” is usually weihnachtsbaum, which would probably have made for a less catchy song.

All those pine needles that accumulate below the tree each day may soon be a thing of the past. Washington State University plant pathologist Gary Chastagner, also known as “Mr. Christmas Tree,” is currently leading a five-year, $1.3 million research project partly aimed at helping Christmas trees retain their needles for longer. Chastagner and a team of researchers are collecting tree samples from farms throughout the country, testing which are the most resistant to root rot and have the strongest needle retention, then sourcing those for seeds to plant the next crop of Christmas trees. If the team succeeds, your tree may last into the spring.
(Alex Palmer https://www.mentalfloss.com/article/71868/11-facts-you-might-not-know-about-christmas-trees)

The first Christmas tree retail lot in the United States was started by Mark Carr in New York, in 1851.

Thomas Edison’s assistant, Edward Johnson, came up with the idea of electric lights for Christmas trees in 1882. Christmas tree lights were first mass-produced in 1890.

Manufactured Christmas tree ornaments were first sold by Woolworths in 1880.

Real Christmas trees came eighth in a survey of the nation’s (UK) favourite smells in 2004, just behind the sea but ahead of perfume.