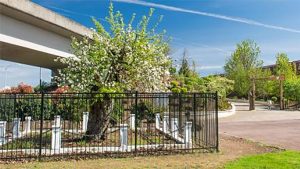 VANCOUVER, Wash. – Washington’s oldest apple tree, a symbol of the state’s industry, has succumbed to a crack in its trunk and died at the ripe old age of 194.

The Old Apple Tree in Vancouver, Washington, whose death was first reported by KUOW, was found to be in poor health in the early summer months after arborists noted shriveling leaves. An examination revealed that a growing crack in the trunk had cut off water and nutrient flow to the rest of the tree.

But sprouts from the roots of the old tree that have grown into small saplings will ensure that the legacy of the century-old tree will live on for years to come.

In a true testament of pandemic-era togetherness, historians and storytellers alike gathered for a virtual memorial service on Aug. 16, and recalled the history of the tree and what it meant to the community.

“The history of the tree starts as a love story,” said Pat Jollota, the Clark County historian. “A young British soldier was given a party to say goodbye in London before he departed for the wilderness of Fort Vancouver. And at dessert they had an apple, and his sweetheart took the core of the apple and handed it to him and said ‘Here, when you reach your new home in the wilderness should you ever think of me, plant these seeds.'”

That one apple core produced six trees, planted indoors under glass in winter and moved outside to Fort Vancouver, which was established by the Hudson Bay Company in 1825 to serve as a post for the fur trade, later in the spring of 1826.

The Fort was the site of the tree and its progeny for many years, withstanding removal time and time again as Vancouver grew. It was threatened by the construction of state Route 14 before the community rallied behind the tree and turned it into a park.

The tree produced a variety of apple called English Greening, which is described by one fruit variety expert as “a very old English apple, already widely-grown by the early 19th century.”

Jollota noted that the variety was slightly bitter and mostly used for baking, but was loved by horses.

The annual festival that celebrates the old tree has been cancelled this year due to the COVID-19 pandemic, but the city plans to celebrate the legacy of the original tree in person next year.

Over the years, arborists have taken home and planted cuttings of the original tree, giving it new life all over Washington. Part of the dead tree will be left to decay and provide nutrients to the saplings it left behind, which will be maintained by the park.

“(The tree) was a part of all of our lives here in Vancouver,” Jollota said. “Though it’s been declared dead, it’s still saying, ‘Hey, I’m still here, wait another hundred years and I’ll be right where I was before.'”

Nearby apple enthusiasts can head over to Piper’s Orchard in Carkeek Park which is estimated to be over 130 years old by local historians and is the oldest known orchard in the city. The charming orchard includes 29 different apple varieties that would have been available in the 1890s as well as nut and pear trees.